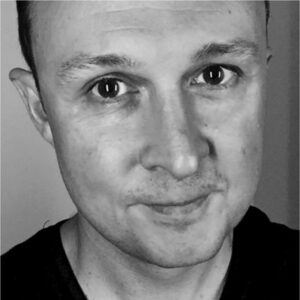 In this very personal account, Vinny Smith, CEO of the Meningitis Research Foundation (MRF) and Confederation of Meningitis Organisations (CoMO) shares a key lesson to take from the process of developing the recently agreed global roadmap for meningitis. The lesson is simple – always think about real people and their stories to drive the movement.

On 28th January 2021 I was diagnosed with Functional Neurological Disorder (FND) by a wonderful consultant neurologist at Southmead Hospital, Bristol, UK. It had been quite a journey to get there.

Less than a year earlier I had just completed a training run for my first half-marathon. In February I had visited Bangkok for a global health conference bringing together Asian experts in meningitis. Two weeks later I was in Geneva for a World Health Organization meeting of the Technical Task Force of which I was a member, working on a new global roadmap to defeat meningitis by 2030. By spring I had completed a sponsored bike ride on my 11-year-old daughters push bike.

Less than a month later I was in the back of an ambulance being rushed to hospital having collapsed at home with symptoms including involuntary shortness of breath and muscle spasms in my arms and legs. Since my trip to Bangkok, I had had a slight cough but no more serious symptoms than that. An MRI scan and overnight hospital stay later, muscle spasms calmed by benzodiazepines, I was discharged. Headaches, muscle aches, sight problems, dizziness, breathing problems, chest pains and extraordinary fatigue followed. After two months off work recovering, I returned through a phased reintroduction over the months of July and August. By late October I had even played a game of golf with friends. Though the year had been horrible, normal me was coming back.

But out of the blue, in January I relapsed. The spasms were back. Headaches lasted days. Every muscle ached. When I went to the GP and the spasms started in the surgery he took a video for me to keep. He confessed he had no idea what was happening. Then he referred me to the Southmead neurological team.

The team there observed and talked to me for nearly two hours. Calmly and methodically the consultant confirmed his diagnosis as Functional Neurological Disorder. I had no idea what it meant.

“Was it COVID that caused it?” I asked. “We will never really know”, he said. “Some symptoms seem very consistent with a viral infection and the fatigue too. You did go to Asia as the epidemic was spreading. And then to Geneva. And you had a cough shortly after.”

“You need to think of your brain as having hardware and software. Your hardware is fine. It is your software we need to try and retrain. Something has kicked it out of a helpful pattern and into an unhelpful one.”

“But now what is important is this”, he said. “You need to think of your brain as having hardware and software. Your hardware is fine. It is your software we need to try and retrain. Something has kicked it out of a helpful pattern and into an unhelpful one. We need to help it back to healthy. The first step is understanding this is what is happening. The second is to take it slowly getting back to more normal activities without shocking your system into resistance. You will not be running for a while. But given you have got much better once before, there is a good chance you will get back to feeling fine again. It could just take a couple of years.”

Leaving the consulting room, I reflected that I was training for a half marathon last year. In November had just helped secure the world’s first ever global roadmap for meningitis at the World Health Assembly. Now I can’t run around and play with my kids. I rely in almost every aspect of my life on my saintly wife. And now I might still need two more years to recover. I asked myself, who was I now?

To answer my own question, one evening I wrote a blog about my year and later shared it on the MRF website. Sitting down after dinner the following Saturday with my family I received a message from an MRF ambassador who had read my story and wanted to offer his encouragement and understanding.

I met Mike Davies in November 2019 when he presented his story and experience of meningitis at MRF’s global research conference. Mike is a quadruple amputee, having lost both lower legs and hands to bacterial meningitis. He is an incredible man and talented public speaker. Given his personal experience, his empathy touched me deeply. I sat crying for the next hour.

There are literally millions of stories out there like ours.

Mike describes himself as a lucky man. I am incredibly lucky man to know Mike. He reaffirmed that telling your story and having someone listen can be incredibly powerful. His story touched me. My story touched him. There are literally millions of stories out there like ours.

Great evidence, data, expertise and collaborations mattered too. But when every partner in the room is asked why the project matters to them, it is the stories of people impacted that matter most. We are doing it for them.

When combined with compelling evidence, our stories will help brave decisions to get made.

When combined with compelling evidence, our stories will help brave decisions to get made. More importantly perhaps, it is about many more people just like me who would not have had the ambulance, muscle relaxants, inhalers, GP, hospital, MRI scanner, ECG, RDT, neurologist, psychologist, physiotherapists, assistive devices, sickness pay, furlough scheme, flexible working, deputy stand-in, or wage-earning partner that are gradually all rebooting my brain with a bit of help from me. If you get lost in the detail, pull back and ask us – those living with neurological conditions, what we need to happen. Then use our words to shape the plan.

Vinny is the Chief Executive of the Meningitis Research Foundation (MRF) and Confederation of Meningitis Organisations (CoMO) with 20 years’ experience enabling transformation of organisations and sectors. In the past 5 years Vinny has helped establish the world’s first World Health Organization global roadmap for meningitis; the Global Meningitis Genome Partnership; the Meningitis Progress Tracker bringing together the worlds best data on bacterial meningitis into one place for the first time; and merged MRF and CoMO to establish the world’s leading combined meningitis charity and patient voice network. He is a former steering committee member of the Global Meningococcal Initiative; a Business Fellow and guest lecturer at the University of the West of England; a Fellow of the Royal Society of Arts and Manufacturers; and currently represents MRF and CoMO as a member of the WHO Technical Task Force working to defeat meningitis by 2030.

Before entering the meningitis field, Vinny lead teams committed to open and transparent availability of international data on financing for development through the International Aid Transparency Initiative and Global Humanitarian Assistance programmes including establishing new teams in Kenya and Uganda; lead the operational and training implementation of a multi-agency domestic abuse intervention model in the UK; restructured the fundraising division of Europe’s largest voluntary income charity; provided consultancy for strategic and operational reorientation of an African economic think tank; and strategy development for a US-based public private global development partnership.